My first memories of Houston are of food.  While in high school and barely legal to drive a car, my friend Terry’s brother hired us to drive heavy duty oil field trucks headed for Saudi Arabia to the port of Houston from Dallas.  Unfortunately, money was tight at the truck company and once we arrived in Houston with the trucks, we discovered our pay was limited to lunch at a local restaurant.   So that meal needed to be special.

Terry knew of a fried seafood joint shaped like a boat on S. Main named Captain Benny’s.  Having been there before, Terry ordered for us and confidently said “we’ll have one of everything on the menu”.  The drink choices were limited to Tab and warm Coors.  But the food was the attraction!  Corn meal breaded shrimp and oysters, raw gulf oysters, fried catfish and stuffed crab were the stars.  Eating at a run-down, smoky and sloping bar where the staff trusted the patrons to keep up with what they had ordered on the honor system only added to the flavor.

On every trip to Houston since then, I’ve tried to eat at Captain Benny’s.  Locations have opened and closed over the years and the S. Main store was even rebuilt.  When Trudy and I moved to Houston I couldn’t wait to introduce her to this wonderful place.  On our way to our temporary apartment in Katy, I spotted a boat shaped restaurant around Mason road and I10, but the sign said “Captain Tom’s”!   Could there be two captains in town now?

Captain Tom’s follows the same model as Captain Benny’s with cornmeal battered seafood in a “rustic”, seafaring atmosphere.  In fact, the Captain Tom’s fried shrimp was just as good as I remember from Captain Benny’s.  All the food is very good at Captain Tom’s.  We even discovered the “Michelada” there which is sort of a beer based Blood Mary.  Way better than it sounds!
So those of you tempted to venture into the boat are faced with a decision.  Which captain?  I’d say the food is equal although Captain Benny’s has a larger menu including some grilled and broiled items (what a waste of good seafood).  The big difference is the service, cleanliness, noise and language barrier.  Captain Benny’s has matured into a place with actual tables and it appears they clean periodically, but has maintained the “charm” I experienced in the late 1970’s.   It’s the kind of place where Trudy and I can have a nice lunch in a boat while receiving good, friendly service. And they have great Micheladas too.

Captain Tom’s is not so much that kind of place.  At lunch, there can be an odd mix of 75% Hispanic construction workers, 5% white bankers, and 5% screaming kids.  If there isn’t a spot at the bar you order by walking up behind someone sitting at the bar and yelling your order once you get someone’s attention.  And you hope that your yelling in English is understood.  When your order is ready, you hope that the person sitting at the bar in front of you is nice enough to hand your food to you.
You can’t go wrong with the food at either place, so you only need to choose the experience you are looking for.  Captain Benny’s combines great food, good service and minimal hassle so that’s where I recommend you try some delicious fried sea creatures!
Posted by Unknown at 2:35 PM No comments:

Long before Benihana and other restaurants like it made food preparation a performance art, an old and familiar slice of Americana allowed us to peer into its kitchen for our culinary entertainment. Known for their steaming hot coffee, crisp waffles, and hash browns (scattered, smothered AND covered), Waffle House was a mecca for late night bar hoppers, or bleary-eyed truckers to partake in some greasy comfort food.

I realize it doesn’t sound like place that I would review on this blog – I’ve focused on cheap and tasty bar bites, but the WF franchise on Highway 6 and 10 is a standout. The food is fast and inexpensive, but what makes it exceptional is the quality of the food. You would think that the waffles would be the star attraction, but for me, the other breakfast staples -- eggs, hash browns, and grits make it worth the trip. The aforementioned hash browns are crisp and golden brown on the outside, but soft and creamy on the inside. And eggs, wow, they cook their eggs perfectly – I’ve been to very fancy restaurants that turned out overcooked eggs. But, the piéce de résistance is the grits – not just any grits, mind you, but a creamy, buttery, salty, steamy bowl of happiness. The one note though, you can’t get these grits every day of the week, at least you can’t get them on Sundays, because the “Grit Meister,” our friend, Lugene, doesn’t work on Sundays.

Lugene is Waffle House’s main short order cook and customer greeter. Not only is he a great cook, but his glowing personality makes the place a destination. He moves gracefully between acting as the social ambassador for the restaurant, and whipping up multiple short orders, making it all look very easy. He is amazing to watch, and is an example of how one person can make a big difference in an organization.

Eating at WF is an experience in itself – hop up to the bar to watch Lugene and all the staff rustle up your meal, or for a quieter experience, sit at the tables near the window. Be advised, though – it’s always very chilly in the restaurant, so bring a jacket. The good news is, unlike many WFs, this franchise has a policy of no smoking, so you don’t have to deal with nasty smoke invading your breakfast experience.

Navigating the parking lot at WH can be a bit of a challenge, especially now with the Mercedes Benz dealership construction happening next door, but the trouble is worth it. The earlier you can get there, the better, because they get busy after 8 a.m.

Try the cheese and eggs special – for $7.90, you get 2 scrambled eggs mixed with melted cheese (delicious!), two sausage patties (or bacon), toast, grits (or hash browns) and coffee. Good food for that price is practically unheard of here in the Energy Corridor. Too many restaurants hype their great food, but few deliver so deliciously and inexpensively as the I-6 Waffle House…check it out!

When I left Long Island in 2008, I didn’t think I would miss much – after all, I’d left to come back to Texas without having a job, so I was serious about leaving New York. As the years have passed since my cross country move, I realized that one of the few things I missed from New York was the pizza. The pizza there is luscious, fresh, and ubiquitous. Unlike Houston, you can pull up to most any mom and pop pizza shop and get a slice of doughy Sicilian, or a slice of crisp and crackery thin crust spread judiciously with fresh sauce – notice I said judiciously, not slopped on - and any number of great toppings. The outside edges of the slice were always crusty and burny-tasting, and great pizza always leaves a dusting of flour on your hands as a reminder of your good fortune at selecting a genuinely excellent slice.

In the seven years I’ve been back to Texas, I’ve yearned to eat a slice like this again – to wait anxiously as the pizza purveyor prepared his perfect masterpiece and slid it gently onto a paper plate. I wanted to smell the fresh tomatoes and basil, and to fold it ever so gently just to bite into the tip end of the triangle. Until now, nothing had satisfied my pizza yearning – but now, I’ve found a local restaurant that has genuinely great pizza and so many other fine points that I wanted to start my new blog with a review of this restaurant – Perry's Steakhouse and Grill in Memorial City. 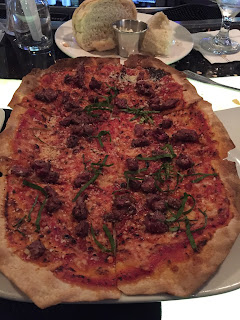 I know, I know, this is a steakhouse, so why do they have great pizza? I have it on good authority (my friend Angela) that the Perry family comes from an Italian heritage, which may explain how this family taps into the essence of what makes a great pizza. Sit down at the bar at happy hour and peruse their bar menu, and you’ll notice the New York Strip Pizza. For $7.95 (Happy Hour price), you get a pizza that covers a good size plate and excellent fresh ingredients. The crust is cracker-thin and burny, and leaves the tell-tale flour dusting behind on your hand. The amount of sauce is just right to give the pizza a flavor boost without making the crust soggy. The pizza is topped off with Italian sausage (sweet) and a chiffonade of basil. We usually split the chopped salad ($9.95), so for just over $20.00, you have a delicious meal in one of the nicest restaurants in the Energy Corridor.

Oh, and did I mention there’s live entertainment? Every evening starting at 6, Perry’s has live music, usually a piano player, which adds a great ambience to the already beautiful surroundings of Bar 79. Happy hour runs from 4 to 6:30 every evening, so no need to pack your bags and move to New York to get fine pizza!
Posted by Unknown at 8:18 AM 1 comment:

Get notified of new posts!